Home Countries Indonesia Battle Of Social Networks in Asia: Who Is Winning? 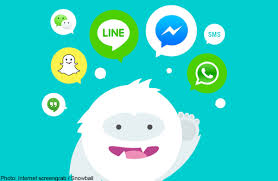 The world is evolving in the direction of the attention economy, and social networks have been top of mind for every investor, entrepreneurs, business executives and consumers. The western hemisphere has been more or less dominated by Facebook and its various apps.

In Asia, the landscape is more dynamic. Wechat from Tencent essentially owns China’s social network market. In Japan and Taiwan, Line is known to be the primary social app, while Kakaotalk has been stubbornly clenching onto its throne in Korea. At the same time, the global giant Facebook has been continuously making efforts to grow its presence in Asia as well. There are also Snapchat and Snow that we discussed last week.

With all these tech companies fighting for market share, we wanted to find out who is winning. Below are our data and analysis.

By taking the average daily rankings for the last 30 days, and slicing & dicing the data set in different ways, we examined which apps are doing comparatively well in each of the countries. What we found next was quite striking.

Although all of the apps we mentioned are all present, Facebook completely dominated the social network markets in India and Singapore. All 4 of Facebook apps took the top spots in download rankings in Apple App Store. Not only that, the difference between Facebook apps’ rankings and other apps’ rankings were significant.

For example, Instagram was the “least” popular app amongst Facebook’s products, ranking 11 in India and 20 in Singapore. In comparison, Snapchat took the number 5 spot in both countries at 24 and 26, 13 and 6 ranks lower than Instagram. Wechat, on the other hand, seems to be not doing so well in India despite Tencent’s numerous efforts to enter the country and ranked only at 171 in a number of downloads.

In Korea, Japan, Taiwan and Hong Kong, Facebook still managed to claim at least one spot in the top 3. Of note, Instagram and Whatsapp are both ranked higher than their incumbent rivals Kakaotalk and Wechat.

This set of data illustrates why Facebook’s acquisition was Whatsapp was a great move. When the deal was announced, the stock market and investors terribly misunderstood why Facebook had to shell out $19bn to acquire Whatsapp. Our data shows, however, does Whatsapp rank #1 in major markets like India, Indonesia, Singapore and Malaysia, and it is also beating Wechat even in Hong Kong right next to the incumbent’s home turf! Without it, Facebook might have been in a worse position globally than it is today.

Spotty “Success” for Line and Wechat

Given how successful Facebook has been, it is not surprising that the other two social network giants of Asia, Wechat and Line, have had limited success outside their main countries. The line is doing well in Indonesia, Taiwan and Japan, claiming top two spots in each of these countries.

It is also worth pointing out that Line and Snow, both from its Korean parent company Naver, are ranked top 2 among social networks in Japan. Snow, in particular, is ranked well ahead of its peers as the top 5 most downloaded app in the country, while the #2 Line is ranked at #16.

Wechat is doing okay in Malaysia and Hong Kong, claiming #3 spot in both countries. This could be a meaningfully big concern for Wechat’s parent company Tencent. For some time, it has shown strong interests in expanding its presence outside of China.

That someone else is completely dominating not only the second most popular market in the world but also beating Wechat in Hong Kong does not bode well for their global ambition.

Last week, our analysis showed that Snow is kicking butt in Asia. Our further analysis this week confirms this overall trend. Snow has been a clear winner in most of these markets, ranking #1 in Korea, Hong Kong and Japan, and #2–3 in Taiwan and Vietnam. That this new app is competing with the global giants on equal ground is quite impressive.

A clear loser in this trend, however, is Snapchat. Not only did it consistently rank in the bottom half of the social apps, it never managed to break top 20 in Apple App Store downloads in our sample countries. While Snap’s $20 billion valuation is indeed impressive, I bet many of the investors have global ambitions for the company. Given our data, however, it seems Snapchat’s global growth opportunities are quite limited at best.

*Views expressed here represent those of the author’s alone. This article is not a recommendation to take any action in the financial market.

Investing Tips for Beginners and a Reminder for Professionals!