Home Life Opinions Battle for the Top Spot in E-Sports: League of Legends or Overwatch? 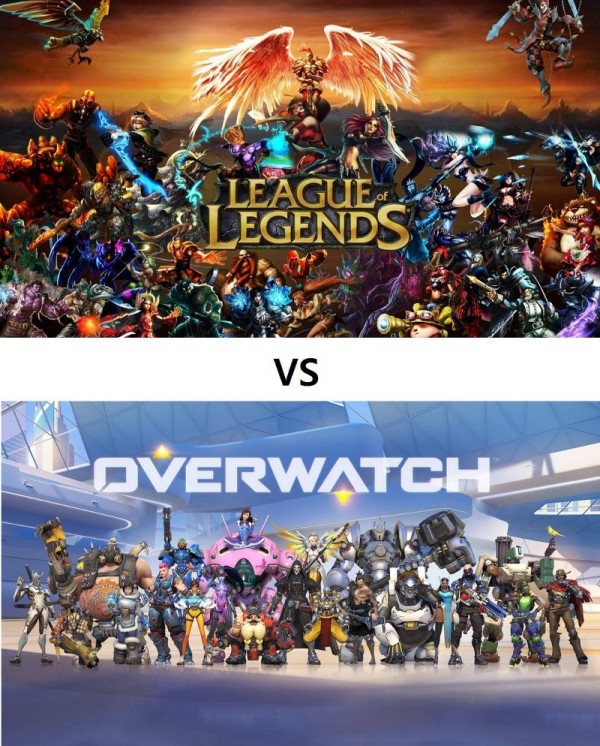 E-Sports is one of the next big things in tech. Some might even say it’s already here. In 2014, League of Legends finals was broadcast on ESPN 2, and its results shocked the world. The famous game from Riot Games (which is owned by the Chinese internet giant Tencent) garnered 27 million viewers, which topped MLB’s World Series Final’s 23.5 million viewers and NBA Final’s 18 million viewers.

No wonder why Amazon shelled out a billion dollars for Twitch. Given the bright future of e-sports, companies are constantly coming up with new games to claim the top spot in the sector.

Most recently, Activision Blizzard a very highly anticipated game called Overwatch. It is basically a combination of is first-person-shooting (“FPS”) game and League of Legends. While the gameplay is similar to other FPS games like Call of Duty, each character you can choose in Overwatch has a different set of special skills. They nailed game lovers’ every fantasy, and the game is taking off.

E-sports is a form of competition based on video games. Games are superbly addicting because it satisfies people’s natural urge to create (Minecraft), compete (League of Legends), collect (Pokemon Go) and nurture (Clash of Clans). Over time, players formed teams to compete and consequently formed leagues and tournaments all over the world.

Advertisers jumped at the opportunity to exploit this new world, and sponsorships have been flowing into the system. Just last year, prize pool was over $18 million for the famous Dota 2 tournament called “the International 2015.” This year, the International 2016 (happening today in Seattle) is offering a prize pool over $20 million.

Consumers love watching skilled professionals play sports. Unlike more “traditional sports,” however, e-sports has been able to create a whole new experience for consumers in this regard. Through live video platforms like Twitch (in the US), AfreecaTV (Korea), and Douyu (China), fans are able to not only watch players practice, but also communicate with them through live chat

. Can you imagine doing something like this with Christiano Ronaldo or Steph Curry? If you are a League of Legends fan, you can do exactly that with Faker (one of the most famous and skilled players in the game); you don’t have to wait for the next tournament to be dazzled by his skills.

League of Legends vs Overwatch

Until recently, League of Legends was the king of the hill. However, it seems like Overwatch is catching up extremely quickly. We have collected data on a number of viewers on Twitch (US), AfreecaTV (Korea) and Douyu (China) for each of the top 5 games in the world: League of Legends, Hearthstone, Dota 2, Overwatch and World of Warcraft.

Results show that Overwatch has already caught up to League of Legends in Korea, a market often viewed as the very forefront and trendsetter of e-sports. While it is still behind League of Legends in the US and China, it is already the second most popular game in both countries after less than 3 months its official launch (May 24, 2016).

The irony of the situation is that two games are essentially owned by the same company. League of Legends was developed by a US company called Riot Games, which was acquired by Tencent for $400 million in 2011. Creator of Overwatch, Activision Blizzard, is a US-based company, but Tencent owns 12% of its shares and is rumoured to be planning to buy more.

Whatever ends up happening, one thing is already quite clear: Tencent & Activision partnership could become the league owners of e-sports like the NBA and the Premier League.

*Views expressed here represent those of the author’s alone. This article is not a recommendation to take any type of action in the financial market

Guide to Returning to Work after Maternity Leave

How to Invest in the Europe Market and Stocks

How To Invest In Singapore