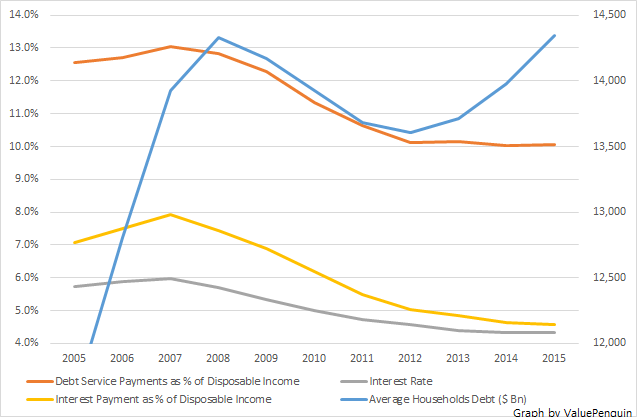 At Jackson Hole last week, Fed Chairman Janet Yellen hinted that Fed may be considering an interest hike in September. To put it simply, the logic of interest hike is that the US’s employment and economic activity have improved.

Since people can handle higher interest rates (given higher income), Fed wants to get ahead of inflation by slowly returning rates from zero to a more “normal” level around 2-3% over the next few years.

We have discussed the negative effects of near-zero interest rates in our previous articles like State of Global Stock Markets and felt compelled to discuss few implications of interest rate hikes. Higher interest rates can promote a healthier financial market by returning risk curve back to normal and reining bubbly markets.
However, our analysis shows that US consumers may not be as healthy as the Fed portrays them to be, and the Fed does not actually have much room to raise rates. Let’s discuss the facts one by one.

The biggest source of optimism is growing in consumer income. And the aggregate figures actually do show growth. According to Federal Reserve Bank of St. Louis, household consumption, median income and disposable income have all reached new highs in 2015.

However, the aggregate numbers hide some crucial information buried in the detail. The most important concept to grasp, in our opinion, is that growth in income has been disproportionately concentrated in the upper-class population.

According to Pew Research, an economic research firm, the median income of the middle to lower class is actually lower than it was in 2007.

This disparity of income growth is largely attributable to the fact that low-interest rates have benefited investors by inflating asset prices in the stock market and private markets. In other words, only people who had enough “disposable” savings to put money in the stock market were able to increase their net worth significantly since 2008.

The subprime borrowers, the very centre of the global crisis in 2008, are not necessarily in better shape than they were a decade ago.

The question remains, then, regarding how overall consumption was able to grow. Certainly, it must not be just the upper class who are buying more. To answer this question, we turn to consumer debt.

When I speak with investors, many are surprised by the fact that US consumer debt is back at its peak in 2008. Although mortgage loans that were at the centre stage of 2008 crisis have declined, consumers have continued to borrow more in credit card debt and auto loans to fund their record high consumption expenditure.

Experts often point to the low debt service payment to disposable income ratio to argue that increase in household debt is not a huge concern.

However, as we pointed out in the previous section, such an optimistic view misses a crucial detail. While the overall economy may seem healthy, one must quickly realize that income growth and debt growth do not necessarily occur equally for everyone.

In other words, the middle to low-income class makes less money than they used to and have borrowed just as much money, if not more, as they did in 2008 to fund their growing consumption.

Consumers are not as healthy as some people may come to believe by just looking at the aggregate figures. Another evidence recently is Dollar General’s disappointing earnings result, when the CEO spoke about reducing prices on categories like milk and eggs.

These two categories are usually good indicators of consumer health because they are stapled foods. When their customers grow reluctant to spend, retailers often discount these two categories heavily to encourage more visits to the store.

An implication of the aforementioned facts is that the only thing keeping our economy afloat is the low-interest rate. Despite lower income and higher amount of debt, consumers are not yet in trouble because low rates make their debt affordable. If this is true, how much room is there for Fed to actually increase rates without destroying this dynamic?

First, you must remember that, as we mentioned in State of Global Stock Markets, that lower interest rates have flattened the risk curve:

One of the biggest side effects of such strategy was the massive influx of capital into the stock market, also referred to as equities. Because of low-interest rates, bond investors were suddenly left with bonds that provided insufficient returns they required.

To look for better yields, they moved their money out of the bond market and into the stock market that offered higher potential returns but with a higher amount of risk compared to bonds. This influx of capital increased competition for stocks and investors found themselves demanding an even lower return on stocks than they had previously.

This behaviour pattern spread, and hedge funds that typically only invested in equities began to make venture capital investments that were previously regarded as too risky, in turn creating an unprecedented number of startups valued above $1bn called “unicorns.”

This series of pattern resulted in a new risk curve that is lower and flatter than typical, implying investors have gotten much laxer with their standards and have begun to accept lower return for a given amount of risk.

If rates rise, the risk curve will likely steepen, and 0.5-1% increase in federal funds rate can translate to 1-1.5% increase in actual rates paid by consumers. This implies that the Fed actually does not have much room to increase rates.

Unless income growth becomes more widespread, we think there’s probably room for about 1% of a rate increase over next few years at maximum, not the 2-3% it has mentioned as a long-term target.

Who Does Financial Management Better? Optimists or Pessimists?

What To Consider When Applying For a Mortgage In Hong Kong

Top 5 CPF Hacks for You