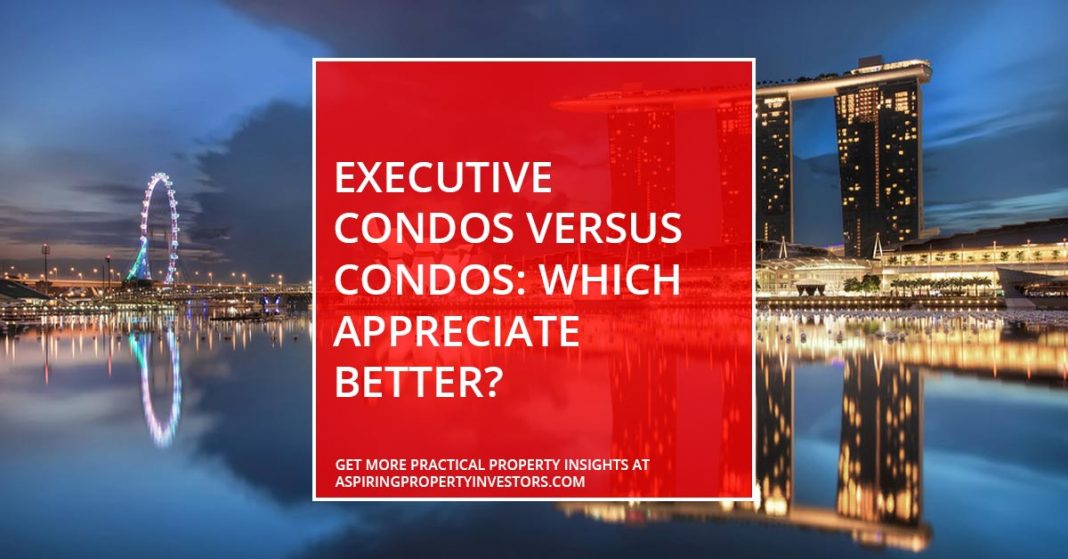 Executive Condos are a hybrid form of housing, that is between a private condo and an HDB flat. This carries some psychological implications – there are many buyers and sellers who will exclaim “How can your Executive Condominium be worth more than my condo?”

This is despite the fact that, when all’s said and done, Executive Condos are also built by private developers that also comes with full suite condos facilities such as pools, BBQ pits, gyms, and other such facilities. And after 10 years, these Executive Condos are fully privatised anyway. In practice, there should be not much difference between them.

But given the market reality – that most people still place private condos “above” Executive Condos – is there a real impact on price appreciation? In this article, we take a look at whether Executive Condominiums are narrowing the price gap with condominiums.

A LOOK AT CONDOS VERSUS ECS ACROSS SINGAPORE:

We can also see that, in 2005, a private condo cost around 37.2 per cent more on average than an Executive Condo, on a per square foot basis. Today, that difference has narrowed to around 36.4 per cent.

As such, we can conclude that on average, Executive Condominiums have narrowed the gap on a price per square foot basis; but there’s still a long way to go before they’re even close to equals. The gap has narrowed by less than one percentage point in around 15 years.

BUT PRICE PER SQUARE FOOT IS NOT EVERYTHING, AND WE SHOULD LOOK AT THE OVERALL PRICE AS WELL

The picture looks a lot rosier for Executive Condos, if you look at overall price appreciation:

(As above, freehold condos have been excluded)

Executive Condos have picked up from around $451,000 to about $1.086 million today. A rise of around 140.7 per cent. That’s an impressive annualised return of just over six per cent, over 15 years.

This is quite a significant narrowing of the gap.

ANOTHER IMPORTANT FACT TO CONSIDER IS THE CASH OUTLAY AT THE START, COMPARED TO THE END

A bank loan can cover up to 75 per cent of the property price or value (whichever is lower). Another 20 per cent can come from cash and/or CPF, while a minimum of five per cent must be in cash.

Assume, for instance, we compare a $1.5 million condo, to a $1.3 million Executive Condo in a broadly similar location (we will assume the Executive Condo is around 20 per cent cheaper, as they’re priced lower than condos).

There is also a family grant of up to $30,000 for an Executive Condominium, and a half housing grant of up to $15,000 (you can check out grants for ECs on the HDB website)

This consideration can make an Executive Condominium’s appreciation seem even more attractive; they cost less at the start, and are also seemingly able outpace private condos in terms of appreciation.

DOES THIS MEAN THAT EXECUTIVE CONDOS ARE BETTER THAN CONDOS?

We should be cautious about viewing properties in large scale, collective terms. These numbers are based on averages across the country. When it comes down to specific comparisons (e.g. The OLA versus Bellewaters, or any other side-by-side comparisons), the results may turn out to be very different. We can’t ignore fundamental factors, such as if the Executive Condos are further away from MRT stations (quite a common occurrence, due to the land plots that the government puts up for Executive Condominium use).

We should also remember that Executive Condos come with HDB-like restrictions for the first 10 years. For example, someone who wants to start renting out the unit right away won’t choose an Executive Condo, as she would need to wait five years for the Minimum Occupancy Period (MOP) to be over before the unit can be rented out.

Likewise, the pool of prospective buyers will be smaller for an Executive Condo before it’s fully privatised; an HDB property can’t be sold to foreigners, for example.

ULTIMATELY, MAKE YOUR FINAL DECISION ON A GRANULAR EXAMINATION OF YOUR SHORTLISTED PROPERTIES

It helps to know the general tendencies of condos and Executive Condos, as mentioned above. But due to the many exceptions when it comes to property, always focus on the individual unit over the general trend.

For a more direct examination of your intended property, please do drop me a message or visit our blog. A 10-minute conversation might make the difference between a property windfall, and disappointment 10 years down the road.

How To Buy Foreign Stocks In Hong Kong

This Is How To Get Your First Business Idea