Home Career Interviews Why Do Women Choose Engineering As A Career In Singapore? 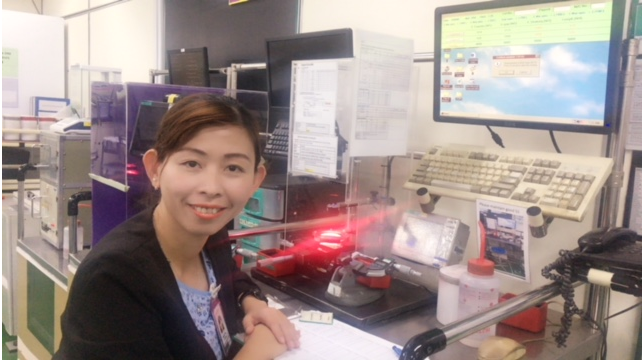 The signs are pointing to a rising presence of females in the male-dominated field of Engineering.

In 2016, a Singstat survey found that a higher ratio of females has enrolled in first and higher degrees in Engineering Sciences in 2014, compared to a decade ago.

A 2015 survey by the latest National Survey of Research and Development showed that among research scientists and engineers in Singapore, there were 2,740 women PhD holders in 2015 compared with 1,729 in 2010.

Why do females decide to pursue Engineering as a career?

We interviewed Ms Raphael Ong, a female Engineer at Murata Electronics Singapore, to find out why.

1) Can you share a brief description of yourself and your career in this industry?

I graduated from NTU’s School of Mechanical & Production Engineering in 2004 and joined Murata as a Process Engineer.

In my career with Murata, I also had the opportunity of going on a job rotation to Machine Engineering which made me a more rounded Engineer and helped me to advance in my career.

Our purpose was to create synergies across each functional group so that judgement and decision-making can be made easier.

The staff could perform timely adaption in the line to match external changes, as well as detect abnormalities internally.

In 2016, I was promoted to manager and am currently in charge of the Multi-Layer Ceramic Capacitor line in my company.

2) Why did you choose the engineering line?

Since I was young, I enjoyed solving problems and getting to the root cause and fixing it.

I also wasn’t interested in commerce and humanities, instead preferring to ponder how things work all the time and being inquisitive about technical details, hence I took up Engineering in NTU.

It is only after I joined Murata as a Process Engineer, I realised my strong desire to “figure things out” is a big plus.

Being a Process Engineer is like working in a CSI role: solving mysteries of process problems are troubleshooting so that things work well.

Uncovering the “mystery” until now still excites me and gives me a sense of satisfaction.

With the technological leaps in Industry 4.0, I think there are exciting opportunities ahead for engineers like me to utilise automation, IoT, Big Data, cybersecurity and other developments to build smart factories, products and services.

3) Name one product that you’ve engineered/designed in Murata that made a big impact.

I helped to launch the production of High Voltage Capacitors (up to 2KV) in Singapore. This is the first in the plant.

High Voltage Capacitors is a promising product in the ASEAN and India region which is an important region for my company.

We expect demand to be high due to the increase in High Voltage Capacitors used in the LED Lighting / Automotive Industry, and the boom in wireless charging.

This product not only made an impact to our customers, but also within Murata as we had the chance to synergize across functions (Market needs, Designing, Qualification, Manufacturing) and create strong collaborations across the entire company.

4) What would attract more females to join Engineering?

There has been a big leap in this once male-dominated sector.

With more awareness about the importance of diversity and inclusive workplaces, there is now higher recognition in our field that female Engineers are necessary to provide a more rounded perspective and consideration in engineering works.

More females will be attracted to take up engineering roles if employers are able to provide them exposure to different opportunities available in the sector, and making the job more exciting and challenging.

Visible support for work-life balance, such as the adoption of flexible working arrangements, will also be attractive for females.

Support for mothers, such as offering them a role change if their pregnancy is difficult, could also help raise retention rates of female Engineers.

To learn more about Engineering as a career, here are some resources you can tap on:

– The Future of Engineering: Jobs and Skills

– Engineering as a career

– How to make a mid-career switch into Electrical Engineering

– Networking with other Engineers

Swati Joshi, CEO of Influenshine, On How Companies Can Thrive In The New World...

Can Credit Card Rewards Make Up for Bad Interest?

The Ideal Kitchen for Cooking Enthusiasts