Home Countries Singapore How Susanne Ng build up amassed a huge online following for her... 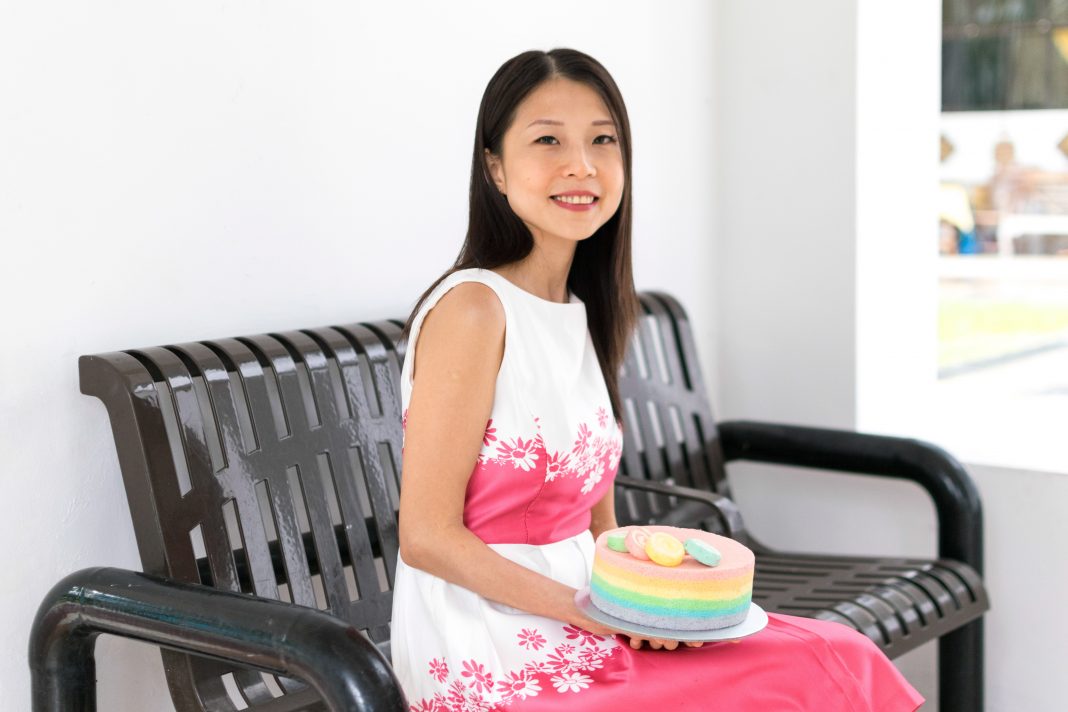 In Her Element is a photoseries by Delegate featuring inspiring women in Singapore who excel in their various domains.

Susanne Ng is a self-taught baker with a talent for turning ubiquitous chiffon cakes into adorable masterpieces. Pusheen cats, cartoon charaters, kueh tutu, unicorns – anything that comes to mind, she has likely attempted before. The 37-year-old has also authored three cookbooks where she shares her tips on making creative chiffon cakes.

A former researcher, she holds a PH.D. in biomedical engineering but decided to dedicate her time fully to her children. Her foray into baking began four years ago when she first experimented on and fell in love with chiffon cakes.

“It’s really just something I bumped into.”

Susanne enjoys working with chiffon as it’s a much healthier option that does not require adding sugar, butter or frosting. The light and fluffy texture also makes it a hit with children and she feels less guilty for letting her kids have an extra serving of cake.

However, she grew bored of plain chiffon cakes and started experimenting with adding in creative elements. She posted photos of her work onto Instagram and shortly, her photos went viral and Mashable even did a video feature on her account.

Now she has over 47k followers on Instagram, who she credits for keeping her motivated.

“I’m just very amazed at how receptive people were to my designs. It’s really what encourages me.”

The ex-researcher has not lost her touch for precision as she shares that baking is as much an art as it is a science.

“The science part of baking comes from the precision needed in measuring the ingredients for the cakes and optimising the recipes. It’s like conducting experiments to test out new ideas.”

Susanne then flexes her creativity in conceptualising the designs and putting together the different components into a beautiful artwork. On average, baking the chiffon cake itself takes about 1.5hours. Assembling the whole cake together could take half a day to a full day depending on the complexity of the design.

The baker not only enjoys exploring designs but flavours as well. She has been trying to expand beyond typical cake flavours, exploring more exotic options like salted egg yolk or gula melaka flavours.

Beyond baking, she also professes a love for Zumba and attends classes at least once a week.

Initially only baking for family and friends, Susanne has started accepting customised orders from strangers ever since her creations went viral on social media. However, Susanne is very selective on the projects she takes on and would usually not accept requests of recreating the same designs. Rather, she’ll offer a twist to requests like these.

Besides, she still believes that she is a full-time mother and a part time baker. This means that she fits in her orders around her children’s’ schedules and often end up having to reject orders.

“My day only starts after my kids go to school.”

However, there were requests that Susanne just could not find the heart to reject.

Recounting a particularly interesting incident, she shared about how there was a customer whose fiancée was in love with her cakes and would not marry him unless he ordered one of Susanne’s cakes for her.

Sometimes it’s guys ordering cute cakes for the girls they are chasing, she laughed.

“But this is really what I bake for,” explained Susanne.

Just like the title of her blog, “Loving Creations”, each of her cake is loving created and she hopes to share this feeling with those who taste them.

Head over to Delegate for more stories on inspiring women and event inspirations.

5 Tips for Saving Money For Dining Out in Singapore

What Are The Risks When Investing In A Hong Kong Property