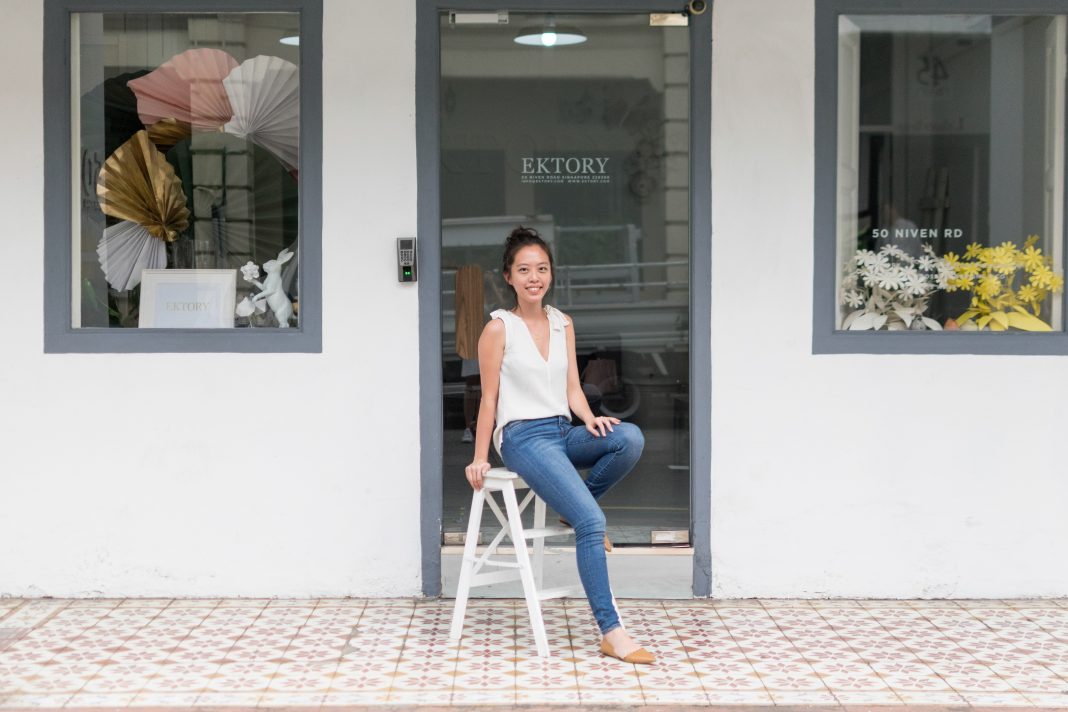 In Her Element is a photoseries by Delegate featuring inspiring women in Singapore who excel in their various domains.

Dawn Koh, the founder of Ektory, is a creative crafter with nimble fingers and an eye for details. Shortly after graduating from the London College of Fashion, she got married and founding Ektory can be described as an unexpected happy accident that happened after that.

It all started from a real-touch flower photowall that she created for her own wedding and posted on Instagram. The flower wall was so well-loved that she received multiple requests about renting it and soon, she received her first request for a photo wall made of paper flowers. From then on, the idea of Ektory took root and bloomed.

“Previously when I was younger I always loved crafting so it was really about rediscovering my passion that I never thought could become a job.”

Ektory is an amalgamation of the words ekleltikós (Greek for “eclectic”) and factory.

“I always liked the idea of eclecticism because it’s about bringing different things together and making them work.”

In a larger sense, she believes that eclecticism describes our relationships with the people around us – it’s amazing how everyone can be so different but still find a common point and build meaningful relationships together.

For Dawn, since a factory evokes the idea of a place where things are made and built from scratch, she hopes for Ektory to be the place that will nurture and grow this belief.

When Dawn first started Ektory, she worked from home and stored her crafts in her mum’s kitchen. However, the business quickly outgrew the kitchen space and she had to move to a storage space and next, a warehouse, before finally settling in her cozy nook on 50 Niven Road.

It has been 3 years since Ektory was established and the brand has grown from a one-man team to a team of 5. Just last month, the team celebrated Ektory’s 3rd birthday.

The Ektory team has formed a tight friendship with their neighbours on Niven Road. In fact, the neighbours requested for the team to help co-ordinate their unit numbers to match the white blocks Ektory used.

To date, one of the most challenging projects Dawn has taken on was designing a flower wall for a photo shoot for Harper’s Bazaar. It turned out that the bride who requested for Ektory’s very first paper flower wall worked for a well-known fashion brand and connected her to the Harper’s Bazaar team. It was a crazy challenge for the young entrepreneur because she only had a few days to finish the 5m-wide flower wall and at that time, she was running the business alone. However, she wanted to push her boundaries and luckily managed to find part-timers to chip in.

“I was still crafting while on the set, on the spot. The whole shoot took about 12 hours.”

The paper flower wall is now one of Ektory’s signature design — a white-on-white flower wall with a myriad of white flowers in all designs and sizes layered on a simple white backdrop. The end result is a masterpiece that is both simple yet detailed, elegant yet not overwhelming.

“I like white because it’s a colour that binds everyone together. It’s a clean slate and fresh, you can build anything on white.”

Crafting is a slow but therapeutic process for Dawn. Each intricate paper rose takes about 2 hours to be completed and a rananculus, with its many layers, takes up to 3 hours. A full-sized photo wall requires weeks of crafting.

After a particularly busy period, Dawn de-stresses by going on a resort holiday. “Anywhere where there’s the ocean is fine,” she said. However, she admits that she never stops thinking about work even when on holiday.

The crafter’s favourite city in the world is Paris. She particularly enjoys walking along the calming River Seine and dropping by concept store “Colette”. One of her favourite spots is within the Palace of Versailles, where Mary Antoinette had recreated a farm within her palace.

Five things the effortlessly chic lady cannot leave the house with are: her phone, ipod shuffle, credit card, Chanel eyeliner and a tube of Benetint (she has it in all the colours).

One thing Dawn has learnt from setting up Ektory is that:

“At the end of the day I feel that if you are passionate about something, even if you have no experience, hard work and passion will triumph anything.”

Head over to Delegate for more stories on inspiring women and event inspirations.

10 Finance Books for Women Who Want to Control Their Money

State of Global Stock Markets After the US Election

What Does Financial Freedom Mean to You? Financial Questions that Matter