Home Career Corporate Life In The Driver’s Seat: How to Drive Your Way Towards Success –... 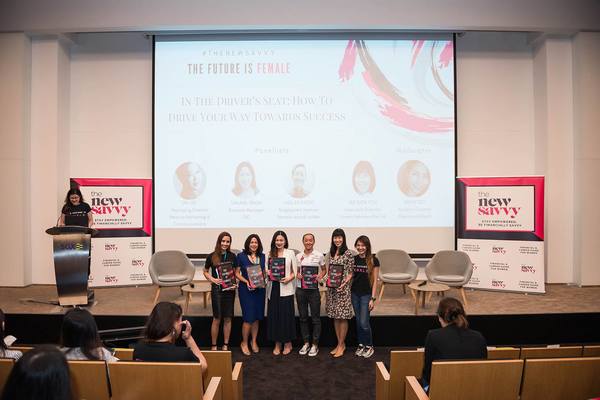 In this recap series of The Future Is Female conference 2017, we dive into one of the panels, In The Driver’s Seat: How to Drive Your Way Towards Success.

Soft power – that is one of the unique attributes of females that makes us good leaders.

Tjin Lee, the Managing Director of Mercury Marketing & Communications, and a strong woman who handles many other businesses revolving around motherhood and fashion observed.

Soft power refers to the way female leaders are able to guide, encourage and suggest alternatives to team members to motivate them rather than enforce and implement ideas typical of a male leader.

The panel, made up of four women successful in their chosen industries, shared a number of useful corporate and career advice. Here are the takeaways they shared that can guide us in our careers.

What Does It Mean To Be An Empowered Woman In Singapore

Tamara Singh, a Business Manager at GIC, shared her experience of feeling brushed off because of her gender. As a journalist in a male-dominated investment industry, Tamara’s opinions and suggestions often get checked against her male counterparts. This may potentially undermine the importance of her work as she cannot be seen an independent contributor.  To combat this lack of trust, Tamara suggests presenting opinions as facts.

“Women speak in emotional terms. As such, not many are convinced when we give a suggestion or share an opinion. I recently started sharing my opinions as facts. Of course, before you do that you have to be sure your idea can work. When sharing, I removed personal words and made sure i was calm and firm. It worked! Now I don’t have to work twice as hard to prove that I am good at my career.”

Tjin continued on Tamara’s point and shared her observation based on her past teams.

Leading an established company, Tjin has hired much staff to manage different functions ranging from marketing campaigns to events planning. She notices a trend that her male staff would approach her for a discussion while her female staff would move on to the next project whenever a project comes to an end.

“When one of my male staff first did it I was quite afraid. I thought he had wanted to resign!” she admitted.

Tjin soon realised that during the one-on-one sessions, the male staff would have a similar approach towards these discussions. They would either strategically highlight their successes in handling the project, ask for a raise, or ask for their efforts to be recorded for their annual appraisals.

“You see, we always lack the confidence to ask for what we deserve. When we ask for affirmation, we bring additional emotional words into the conversation. Phrases like ‘I think’ and ‘I guess’ do little to help us grow and get that advancement. I always admire my male colleagues who confidently demand acknowledgement of their good work. We should emulate this attitude too!”

Very Sure versus Pretty Sure

Media portrayal of gender roles is often misleading. For example, men are assumed to be quick decision makers when they receive enough facts to judge. On the other hand, women are assumed to be more careful in their decisions as they can only decide when they have all the available facts with them. Thus, it implies that women tend to be slower in decision-making and are more likely to second-guess themselves.

In the past, Tamara disliked this portrayal and sought to change it through discussions and mentorship. Now, she has come to a decision that such a trait is not negative.

“Women simply act with true conviction,’ she opined,’ and knowing all the facts before committing is not such a bad thing. Team members working with or under us can be assured of our thoroughness and dedication.”

Be More of a Specialist and Less of a Generalist

Kee Siew Poh, Associate Director of Finexis Advisory Pte Ltd, acknowledged that women are great multi-taskers. Despite this, she suggested that we should also take the time to focus on improving in at least one skill.

“That doesn’t mean you put aside everything and focus all your hours on one skill only. Right now, women are more generalists because we’ve been multitasking, whether at work or at home. We know enough to survive in our many different roles, but if we just put in a few more hours to focus on improving one skill, we can be specialists in delivering that skill. That way, no one will doubt our abilities and our passion.”

Ling Er Choo, Singapore’s Ironman female record-holder echoed this idea. As a triathlete, her main goal is to excel in the next competition.

“I’ve always been in track and field, so I naturally know my specialisation right from the beginning. When I met with a near fatal accident in 2009, I was deemed a partial handicap by the doctors but my dedication and extensive knowledge of the sport allowed me to overcome my adversity slowly but surely. Today, I am the first Singaporean to qualify for the Kona Ironman World Championship twice.”

“The most important advice I have for anyone is think big, start small, and build deep on your conviction.”

Stop at Good Enough, But Don’t Give Up

Balancing family, career and other commitments while being a perfectionist in all aspects is near to impossible. The key is to know how to accept that being good enough is fine and pressure may not be always beneficial for our cause.

“The societal pressure on women to be perfect is way higher than men, and there is not much that we can do. What we can do though, is to be comfortable with being good enough, and learn to let go. For example, am I an exemplary mother? No, but I am good enough for my children.”

Ling also shared that she motivates herself with a significant amount of pep talk. While being good enough is not the best approach, Ling values the importance of knowing her limits and building up her strengths steadily.

“When I first started out, I had to train with men as there were very few female athletes. I was my own competition, and I learnt to pace and compete with myself. Most of the competitions I entered then were male-dominated, but it didn’t matter. At least I showed up, at least I tried. If I clock in a great timing, that’s good, and if I win, that’s great and blow to the male competitors. Whatever it may be, I know I tried my best.”

Tjin also shared her lesson of letting go and deriving satisfaction at the ‘good enough’ stage.

As the managing director of a communications and marketing company, Tjin is a detailed person when it comes to the execution of events and campaigns under her company. In one instance, she learnt to trust her team in a situation when she was too focused on finding a correct shade of colour for an event. Wanting perfection, she sent her team scrambling for the change and added more pressure to herself along the way.

Yet, she realised that it was not worth the work when she understood the amount of stress she imposed on her team and herself. She felt disappointed with her management skills and sought to place more trust in her team’s abilities. As a result, she saw her team pulling off projects successfully and she decided that it is time to let go of her fixation.

Stick by Your Own Values

The panellists warned that there would be times that you would be asked to make sacrifices for the company when climbing up the corporate ladder. It is essential to have your own set of values and stick by them as these values will shape your role in the company.

Tamara stressed the importance of using the same set of values to set up parameters in the workplace. As a working mother and a leader, she has learned to decline requests that do not align with her set of values and those her team have defined. Therefore, she has a clear stand on what she can take on and when to reject.

“When you clearly define your set of values, you will learn how to say no. For every project that gets thrown your way, remember that you have a choice to accept or decline. If you lead a team, the onus is on you to also ensure that your team members are not stressed in meeting the requirements. If you have a family, the onus is on you to ensure that the project does not ask for familial sacrifice. Whatever it is, your set of values will prevent anyone from taking advantage of you.”

Kee also reminded the audience that ultimately life is a journey filled with constantly shifting benchmarks. Thus, no one would be able to claim that they have accomplished everything they sought out to do. Defining your set of values clearly, you can direct your focus towards accomplishing each benchmark based on these values.

Here are 3 tips to be successful:

After all, work is not a chore when you do what you like. Dedication and trust appear hand in hand with your efforts. When you have truly convinced yourself to work at this pace, you will find that corporate progression can be a much easier feat!

If Cash Isn’t “Dead,” Then What Is It Being Used For?

Ways To Guarantee Your Retirement and Plan For It Efficiently

4 Critical Strategies Businesses Must Use to Improve Conversion Rates

Sharing Economy – Thumbs Up and Costs Down